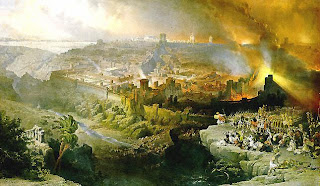 According to secular sources, the fall of ancient Jerusalem to the Babylonians took place in 586 B.C.E. and most everyone believes that. Very few will even give it a second thought. However, there is one group that claims this date is wrong. Who are they?

You guessed it--Jehovah's Witnesses. But why do they disagree? Well, for one thing, they look to the Bible. And the Bible teaches a different date. Which one? Almost 20 years earlier: 607 B.C.E. Before going into this let us look at why non-Witnesses look to a date 20 years later for the fall of Jerusalem.

Most base this off of an ancient document called "The Canon of Kings" or, more informally, "Ptolemy's Canon." This document was a dated list of kings used by ancient astronomers as a means to date astronomical phenomena, such as eclipses. This canon is based off of mostly Babylonian sources and so it list Babylonian kings all the way back to King Nabonassar.

From King Nabonassar, the list continues through the Medo-Persian world empire, through the Grecian (Macedonian) empire all the way to the Roman empire, ending in 160 CE with Aelius Antoninus. The point that we are interested in, though, is King Nebuchadnezzar who is believed to have reigned from 604-562 BCE. If believed, this would pose a problem to Jehovah's Witnesses. Why? Jehovah's Witnesses teach that Jerusalem did fall under Nebuchadnezzar, just like the Bible says-2 Kings 25:1, 8-9; Jeremiah 39:1-2

Well, there is. You see, Ptolemy was not one bit interested in Babylonian history. What he was interested in was astronomy. So what he did was compile a list of all the kings where some major astronomical event happened during their rule. Also, any kings who ruled for less then one year he excluded from the list. So that presents a problem. A twenty year problem!

Jehovah's Witnesses have no problem with the accepted year that the Jews returned to Jerusalem after the fall of Babylon, which occurred in 539 BCE to the Persians, allowing the Jews to return to Jerusalem in 537 BCE. By doing basic math, we reason that from 537 BCE, counting back to 586 BCE, that is about 50 years. Yet, look at what the Bible says about how long the Jews were exiled.

"In the first year of [Darius'] reigning I myself, Daniel, discerned by the books the number of the years concerning which the word of Jehovah had occurred to Jeremiah the prophet, for fulfilling the devastations of Jerusalem, namely, seventy years." (Daniel 9:2) The Scripture Daniel was referring to was either Jeremiah 25:11-12 "And all this land must become a devastated place, an object of astonishment, and these nations will have to serve the king of Babylon seventy years” or Jeremiah 29:10 "For this is what Jehovah has said, ‘In accord with the fulfilling of seventy years at Babylon I shall turn my attention to you people, and I will establish toward YOU my good word in bringing you back to this place.’" Both of these Scriptures say "seventy years."

Now, another indication of seventy years instead of fifty is what the Prophet Zechariah said to the returned exiles from Jerusalem. "And the word of Jehovah of armies continued to occur to me, saying: 'Say to all the people of the land and to the priests, "When you fasted and there was a wailing in the fifth month and in the seventh month, and this for seventy years, did you really fast to me, even me?" (Zechariah 7:5, compare Zechariah 1:12) On the anniversary of the fall of Jerusalem the Jews would fast in rememberance. God was telling them that this was not how it should be. They shouldn't be moping and feeling sad over their punishment but looked forward in joy that now they had a fresh start. The Bible says they did this for seventy years.

One last piece of evidence that should be considered is this Scripture: "Furthermore, he carried off those remaining from the sword captive to Babylon, and they came to be servants to him and his sons until the royalty of Persia began to reign; to fulfill Jehovah’s word by the mouth of Jeremiah, until the land had paid off its sabbaths. All the days of lying desolated it kept sabbath, to fulfill seventy years."-2 Chronicles 36:20-21

Every seven years, Jehovah commanded that no work was to be done on the land. It was to be a Sabbath year. When the Jews stopped obeying Jehovah, they stopped following the Sabbath year command. This went on for some time, how long we do not know, but Jehovah chose to make the years for the Sabbath years to be kept 70 years. Also notice how this Scripture says it was "lying desolated" for seventy years. Many argue that Jerusalem was attacked in 607 BCE and again a few years later and that is what Daniel and Jeremiah were talking about. They point to the word "devestations", claiming that there was more then one devestation. However, 2 Chronicles makes it clear that the land lay desolate for seventy years.

All of the Biblical evidence points to 607 BCE as the fall of Jerusalem. It is proven without a doubt that the Jews returned home in 537 BCE, making their stay in Babylon seventy years just like the Bible, and Jehovah's Witnesses, claim.