You Are Invited to the Kingdom Hall! 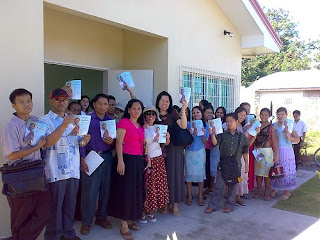 Kingdom Hall's are places of worship used by Jehovah's Witnesses. There, we go together for Bible instruction, spiritual refreshment, and up-building association with just a few members of our precious Christian brotherhood. While there are more then seven million active Jehovah's Witnesses worldwide, we get to visit with a few of our spiritual brothers and sisters each week. You can experience this, too!

What is a Kingdom Hall?
A Kingdom Hall is normally a simple building built by Christian volunteers. They are modestly yet beautifully decorated on the outside with with constant tending to keep it from becoming overgrown, messy, or littered. A sign close to the road clearly identifies the Kingdom Hall.

On the inside we have two back rooms where student talks are held separate from the main meeting hall. There is also a small room where elders, pioneers [full time evangelists], or others meet when needed. As you walk through it you will find a mens and a womans bathroom. Also, you can find a children's room where a parent can retire to so that they can see to any needs related to child care.

Off in one corner of the modest lobby is the literature counter. Here members and non-members alike can request certain books of interest or place special orders for a number of items. These are normally maintained by Ministerial Servants [equivalent of Deacons] or other qualified brothers who show spiritual maturity and a willing spirit.

The main hall of all Kingdom Halls is a large auditorium that can seat from 100 to 200 people. There is a sound booth in the back and a podium on the front where the speaker gives his Bible discourse. 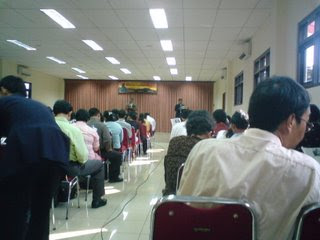 There are no images or idols throughout the Kingdom Hall, only modest decorations. In the Kingdom Hall I attend we have plants and beautiful pictures throughout and two areas for "Lost and Found" items. There is also an information board with any announcements or letters. The Hall is cleaned and maintained by Christian brothers and sisters.

What Happens at the Kingdom Hall?
In one recent issue of our main religious journal, The Watchtower: Announcing Jehovah's Kingdom, there is a great article speaking of the Kingdom Hall. It says:

"In harmony with these Scriptural precedents, [Scriptures such as Deuteronomy 31:12 and Hebrews 10:24-25] Jehovah's Witnesses meet together at their Kingdom Halls twice a week. The meetings help attendees to appreciate, understand, and apply Bible principles. Where possible, the program is the same worldwide and each meeting has its own spiritual objective. Before and after the meetings, those who attend enjoy an "interchange of encouragement" by means of upbuilding conversations."-The Watchtower, February 1, 2009, p. 20, pp. 5

There is nothing intimidating about the meetings that take place at the Kingdom Hall. On Sunday (or Saturday depending on the number of congregations that meet at the Kingdom Hall) we have a public discourse that features a selected Bible topic of interest to those in our area and regular members. That is then followed by a study out of our Watchtower magazine. This is a question and answer based format where individual members of the congregation put in their thoughts about the article or any information they got out of it.

On a different day of the week for each congregation worshiping in the same Kingdom Hall, we have the Congregation Bible Study, currently being conducted out of the book, Keep Yourselves in God's Love, we have the Theocratic Ministry School, which trains members of the congregation in speaking and presenting the Bible message, and the Service Meeting, which gives helpful information that can be used in our public ministry.

Each meeting begins and ends with "heartfelt spiritual song" and prayer with another kingdom song dividing the various meetings. 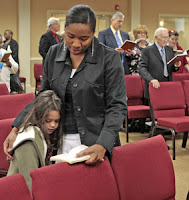 (Ephesians 5:18-19) Each song is based on a Scripture from the Bible. There are no collections taken throughout the meeting. For those who wish to donate there are marked boxes in the lobby where donations can be discreetly given. Donating is not and should not be done "grudgingly or under compulsion". Members give only what "each one...has resolved in his heart."-2 Corinthians 9:7


What Visitors Think
One young man said of his experience at the Kingdom Hall, "It was a delightful place to be. I was so surprised by how friendly the people were and how interested they were in me." Another young visitor said, "The meeting was very interesting! It was easy to follow along." A person in Japan said, "I must admit that when I attended my first meeting with Jehovah's Witnesses, I felt a little out of place. Even so, I came to appreciate that these people are normal. They really tried to make me comfortable."

A good friend of mine that I met when he attended the Kingdom Hall who no longer lives in the area was thrilled at how loving and kind the brothers and sisters were. He continued to come back and eventually began to go out in the field ministry. This was all due to an article that he read in a copy of The Watchtower regarding the Kingdom Hall!

Yes, there are many benefits that can be earned by attending the Kingdom Hall. No one ever leaves feeling left out, isolated, or ignored. In fact, in one country a Caucasian man who committed a hate crime against an African-American was told by the judge that his sentence would be that he had to attend a predominately African-American church for six weeks. The first week he attended the Kingdom Hall of Jehovah's Witnesses and yet for the next five weeks attended another church not associated with Jehovah's Witnesses. Why?

When the judge asked the man why he only attended the Kingdom Hall once and attended the other church for the rest of the time the man said, "The people at the Kingdom Hall wouldn't leave me alone. So many different people came up to me before and after the service saying hi, asking my name, and trying to have conversation with me. I just wanted to be left alone. At the other church that I went to no one spoke to me so I kept going." When asked his opinion of African-Americans he said that they were not bad, changing his mind largely in part to his experience at the Kingdom Hall! 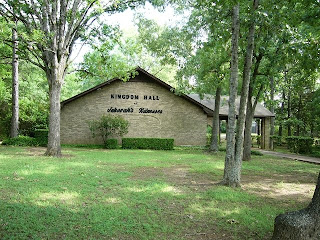 Never will you feel weird at a Kingdom Hall. We try to make you feel warmly welcome and take a sincere interest in you as a person. Our prayer is that you enjoy it so much the first time that you want to return. We want to meet you and so invite you to experience worship at the Kingdom Hall. May you enjoy it so much that when you are invited back you feel the same way as King David who said, "I rejoiced when they were saying to me: 'To the house of Jehovah let us go.'"-Psalm 122:1

To find the Kingdom Hall nearest you go to: This page or write to the appropriate address. We look forward to seeing you!

For more information on the Kingdom Hall visit this page.
Posted by Me at 8:15 PM